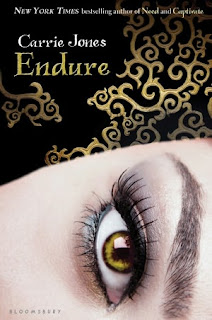 Title: Endure (Need #4)
Author: Carrie Jones
Publisher: Bloomsbury
My Copy: review e-copy received for blog tour
Summary: Zara is at the center of an all-out war, and an impending apocalypse. True, she’s successfully rescued Nick from Valhalla, but it simply isn’t enough. Bedford is being ravaged by evil pixies and they need much more than one great warrior; they need an army. Zara isn’t sure what her role is anymore. She’s not just fighting for her friends, she’s also a pixie queen. And to align her team of pixies with the humans she loves will be one of her greatest battles yet. Especially since she can’t even reconcile her growing feelings for her pixie king…
Unexpected turns, surprising revelations, and one utterly satisfying romantic finale make Endure a thrilling end to this series of bestsellers.

My Thoughts: Until I started Endure, I had forgotten how much I absolutely adored this series. In fact, I think it may be one of my all-time favorite series so I definitely recommend reading the entire series if you haven't already because they pretty much rock.

My favorite thing about Endure was Zara's voice. It's not your typical teenage girl narrator voice - Zara's spunk and personality truly comes out in the narrative. It's funny, unique, and just makes the entire novel fly by. Plus, I guarantee all girls reading it will not only be able to relate to Zara but also be a little jealous that they aren't as cool and sassy as she is.

Endure picks up not too long after the previous book ended, with Zara and Nick in an interesting situation now that Zara turned into something he refuses to love because she loved him so much and needed to save him. Imagine how much that must suck. But, of course,that's not Zara's biggest problem - there's an evil pixie king and an army of evil pixies attempting to start the apocolypse and kill Zara and her friends in the process.
Sounds pretty insane, right? Right. Once the action in this book starts (on the first page), it never ends!

A great cast of secondary characters, some evil pixies, a very cute pixie, Hel, and a lovely scene featuring 30 Seconds to Mars make Endure a book that you absolutely do NOT want to miss!
Posted by Harmony at 7:33 AM

Get A Free Data Entry Job Trial When You Register In The $10biz.
Get Paid Directly To Any Account Instantly.
Earn $10 For Every Order Processed
For Full Details Visit Http://www.Jobzinn.com
Click On Email Processing Jobs

fulfill your dreams (11558)
we gives you the easiest way to increase income
For more details visit: http://eazy2earn.com

Verry Nice Site.. How to Create This Site ...