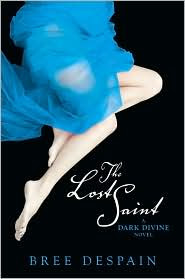 The eagerly awaited sequel to The Dark Divine releases next month but in the meantime, I have a copy of the coveted ARCs to give away! (A review with my thoughts will be coming soon but let me just say that it's AWESOME!)
To Enter:
Leave a comment with your email.
Extra entry for being a follower. (Tell me so in your comment.)
Ends December 7th.
US entries only!
Posted by Harmony at 11:44 AM 22 comments: 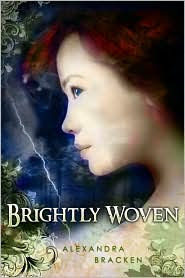 One of my all-time favorite books is Brightly Woven by Alexandra Bracken and I think that any fantasy fan will agree that it's amazing. There's plenty of magic and battles but also romance which makes it perfect for every reader. Even better, if you buy a copy now, you can be entered to win a bunch of things.

Other Options: Other by Karen Kincy, for the paranormal fan looking for something new, and any book by Tamora Pierce for the fantasy fan.
Posted by Harmony at 11:22 AM No comments:

BMGCP: The Clearing by Heather Davis

As Day One of Books Make Great Christmas Presents, I'm featuring one of my favorite historical and time-travel books, The Clearing by Heather Davis. 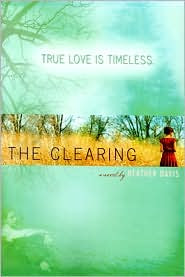 The Clearing is both historical and a time-travel novel. It's short and once you start the story it's hard to put down, making it ideal for reluctant readers. I think adult fans of The Time Traveler's Wife would also enjoy it. My full review is here.
Alternative: Lady Macbeth's Daughter by Lisa Klien. It's a great historical romance for the historical fan. One of my all-time favorites.

Christmas is my favorite type of year. In my house, we celebrate starting...well, now. My grandma just decorated her house because we celebrate Christmas with my little cousins at Thanksgiving.

I love buying presents. I feel the need to buy things for EVERYONE and I put a TON of thought into each gift. 90% of the gifts I give are either homemade (not necessarily by me) or books. Books make amazing Christmas presents. But, sometimes, it's hard to decide what ones to buy.

That's why I'll be running a feature between now and Christmas featuring different books that would be great Christmas gifts for absolutely everyone.

In the meantime, what are your favorite books to give as gifts?
Posted by Harmony at 1:00 AM 1 comment: 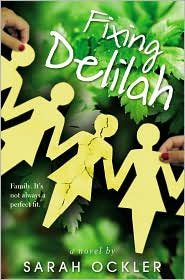 Summary: Things in Delilah Hannaford's life have a tendency to fall apart.

She used to be a good student, but she can't seem to keep it together anymore. Her "boyfriend" isn't much of a boyfriend. And her mother refuses to discuss the fight that divided their family eight years ago. Falling apart, it seems, is a Hannaford tradition.

Over a summer of new friendships, unexpected romance, and moments that test the complex bonds between mothers and daughters, Delilah must face her family's painful past. Can even her most shattered relationships be pieced together again?

My Thoughts: I absolutely adored Sarah Ockler's previous novel, Twenty Boy Summer, and I was eagerly looking forward to Fixing Delilah so when I picked up a copy at ALA, I was ecstatic.

Fixing Delilah captivated me from the first page. It picks up at a spot where it's impossible to not wonder what's happening and that alone keeps you flipping the pages. Each chapter presents you with new questions and unncertainities. What really happened? Why does no one speak of her grandma? I was so into finding out what the answers were, that I barely put the book down.

One of the many things that makes Ockler an amazing author is her ability to effectively write complicated and realistic relationships. The relationships between Delilah and her mom, her mom and her aunt, Delilah and her not-boyfriend, Delilah and her friends, her mom and her grandma and everyone else are each so well-written and the core of the entire book. Each of the characters themselves are like real people - there's no perfect boy or good-two-shoes girl in Fixing Delilah. The story honestly and accurately tells the story of a broken family and does it very, very well.

Fixing Delilah did not disappoint and Miss Ockler is certainly earning her place as an author to look out for.
Posted by Harmony at 12:49 PM 1 comment:

The DUFF by Kody Keplinger 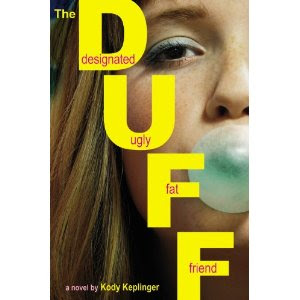 Seventeen-year-old Bianca Piper is cynical and loyal, and she doesn't think she's the prettiest of her friends by a long shot. She's also way too smart to fall for the charms of man-slut and slimy school hottie Wesley Rush. In fact, Bianca hates him. And when he nicknames her "Duffy," she throws her Coke in his face.

But things aren't so great at home right now. Desperate for a distraction, Bianca ends up kissing Wesley. And likes it. Eager for escape, she throws herself into a closeted enemies-with-benefits relationship with Wesley.

Until it all goes horribly awry. It turns out that Wesley isn't such a bad listener, and his life is pretty screwed up, too. Suddenly Bianca realizes with absolute horror that she's falling for the guy she thought she hated more than anyone.

My Thoughts: You're either going to love or hate The Duff. I loved it.

My favorite thing about the story is the characters, Bianca and Wesley especially. Most books feature characters that the reader can relate to and sympathize with. Not Keplinger. These characters are people you're going to want to hate. Wesley is your typical player that everyone who isn't sleeping with him loves to hate and Bianca is sarcastic and cynical, sometimes to the point where she's downright mean. Neither of them are people I would want as friends. But man, they totally ROCK the story. It's so realistic because these are REAL characters. They have multiple sides to them, just like real people do, and there's just something about them that makes you want to keep reading.

Keplinger kept the plot upbeat while also tackling some tougher subjects. There's a lot of dry humor in the story, which I loved. However, there's also some tough subjects presented - self-image, divorce, drunk parents, etc - and Keplinger did a good job of handling them. I felt like more time could have been spent on them but in my opinion, this wasn't necessarily a heavy issue book. The issue of self-image was the most heavily tackled, considering the book is called the DUFF or, The Designated Ugly Fat Friend, and Keplinger's take on it is unique and not necessarily what the reader would expect.

There were times when The Duff truly surprised me. I thought I knew what Bianca was going to do and then the book took a completely different route. I loved that, as well as the intense scenes between Wesley and Bianca.

Overall, I absolutely adored The Duff. I wish that certain parts had been developed slightly more but even so, it managed to keep me up half the night until I finished reading. I am thoroughly looking forward to whatever Keplinger comes up with next!

Posted by Harmony at 1:18 PM No comments:

1.) Yes, I've been a little MIA lately. School is insane. I have no clue why I took 9 classes, especially when half of them are honors courses or require extensive writing. Insane.

2.) I finally revealed a secret project I've been working on for a loong time! Check it out here! There's even a contest for spreading the word.

3.) The 2010 Fall PAYA Auctions have started! There's a bunch of signed books up right now, including a signed copy of Will Grayson Will Grayson, and all of them would be FANTASTIC Christmas presents. The proceeds go to libraries so go bid!

4.) I started a writing blog. It's time for me to step up with my writing, so instead of just occassionally blogging about it here, I'm now on Wordpress. Head on over to read about my NaNoWriMo book!
Posted by Harmony at 6:43 AM 1 comment: 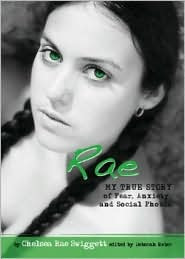 Rae is beyond socially awkward.

Since she was a little girl, Rae Swiggett knew something was different about her. The sound of planes flying overhead could spark a panic attack. Being called on in class was enough to push her over the edge. She feared the unknown, life, death, people . . . even fear itself.

By the time she reached ninth grade, Rae was muddling through life in relative silence, convinced everyone was mocking her, judging her, picking her apart, bit by little bit. Rae knew she couldn't keep going on this way. She knew something had to give.

'It's a game of catch-22 I constantly play with myself. If I keep acting normal, I hope one day I will be, but every time I try, I just let myself down. I'm so entirely sick of this game.'

I didn't need to worry, though, because Chelsea is a dang good writer. Out of all the Louder than Words books I've read, hers is by far the best - you can tell that writing is her passion, what she lives and breathes. I've often found memoirs hard to read because they tend to not flow as well as fiction but Rae was an exception. I often found myself getting lost in the prose and cheering for Rae and forgetting that I was, in fact, reading a true story.

Rae is also an incredibly easy book to relate to because even though it may not be on such a severe level, I'm sure we've all had anxiety about an upcoming moment or found ourselves feeling like everyone was staring at us. Chelsea's story does not stop there, though, and I definitely think it's a story everyone should read. It's not heartbreaking and probably won't give you an "Oh my god, I can't believe that happened! That poor girl!" reaction, but it will definitely give some insight, perhaps to yourself or someone you know, and, at the core, it's just a good book.

My one complaint is that at times, I lost track of the timeline. I also would've liked to see some events expanded on and perhaps more of a push on the importance of writing and books in her life. But, I also realize there was a strict word-count rule and deadline.

Overall, bravo to Chelsea for writing such a fantastic debut!
Posted by Harmony at 2:09 PM 1 comment: